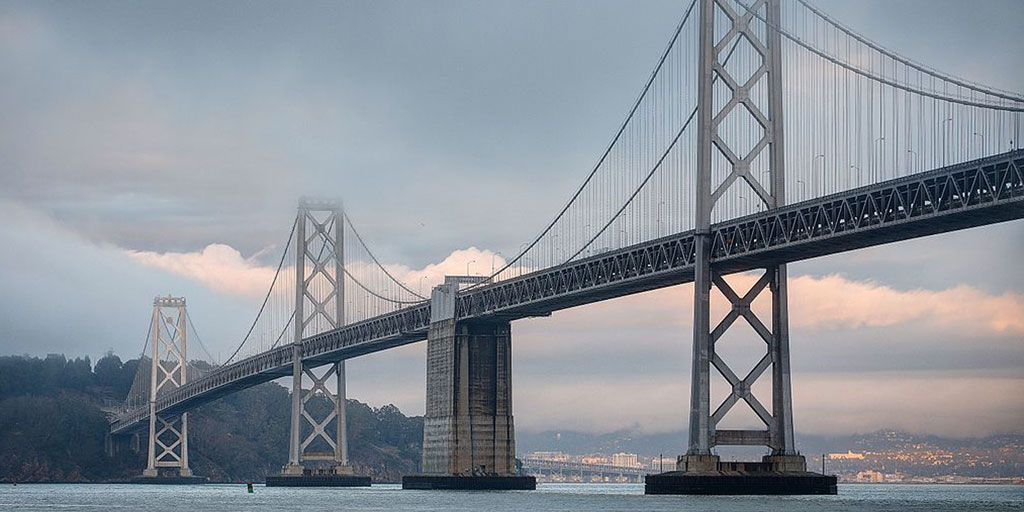 Every 4 years, the American Society of Civil Engineers (ASCE) issues a “report card” for the condition and performance of America’s infrastructure. In 2017, that grade was D+. This may not be a surprise to many people because politicians and the news media have been pointing out the need to repair/upgrade our infrastructure for years. What is surprising, however, is the lack of progress toward that end. America’s continuing neglect of infrastructure needs could cost $3.9 trillion in GDP, an amount equal to the entire GDP of Germany.

ASCE rates 16 infrastructure components such as bridges, levees, and roads to establish an overall grade. With that grade comes a caveat, though. Each of the categories is interconnected. Consequently, if we improve our water system, but fail to address the needs of the energy grid, the water system likely won’t function effectively. So, it is essential to examine the infrastructure problem holistically.

In this article, we take a closer look at America’s decaying bridges. ASCE assigned a grade of C+ to this country’s bridges. While a C+ certainly is better than the overall infrastructure grade, it is important to note that ASCE finds a significant number of bridges structurally deficient.

Here are some key facts about our nation’s bridges from the ASCE:

Bridges are important to the economy. For example, the value of goods transported by trucks via highway in this country is greater than the value of goods shipped by any other means— $11 trillion in 2017. Transportation accounts for about 10.8% of our GDP.

Historically, the Highway Trust Fund (HTF) has been the source of federal funding for investment in bridges. However, the Fund has been teetering on the brink of insolvency for a decade, mostly due to limitations of its primary revenue source, the federal motor fuels tax. The HTF was established under the Federal Highway Act of 1956 and funding for the agency came from a three-cent per gallon gasoline tax. Today, the tax is 18.4 cents per gallon for gasoline and 22.4 cents per gallon of diesel fuel. Although the tax has increased over the years, so has the average cost for highway projects. States rely on the HTF for funding transportation projects, and many states have suspended highway and transit projects for lack of federal funds.

Apart from the need to maintain our bridges for their economic value, the most important reason is for public safety. Here, we look at three bridge failures, the causes of each, and the tragic toll they took.

Some of the Deadliest Bridge Collapses in the Last 50 Years

A 1,460-foot section of the suspension bridge on Highway 35 connecting Point Pleasant, WV, and Gallipolis, OH, collapsed into the Ohio River in a mere 20 seconds due to a fracture in the bridge. Forty-six people died and nine people were injured seriously as a result.

At the time of the failure, 37 vehicles were crossing the bridge, 31 of which fell with the collapsing section. Witnesses said that the collapse sounded like a shotgun firing. Many of the vehicles that tumbled into the water were floating downstream while passengers were beating on the windows to escape. One truck driver, who managed to get out of his vehicle by breaking a window, was seen standing on the cab of his truck yelling for help. He survived, but a passenger in the truck did not.

Constructed in 1928 by the American Bridge Company, the Highway Bridge was a two-lane eye-bar suspension bridge measuring 2,235 feet, including the approaches. The nickname, “Silver Bridge,” came about because it was the country’s first aluminum bridge. Its roadway had a width of 22 feet plus an additional 5-foot sidewalk. Other unique features of the bridge were its high-tension eye-bar chains, rocker towers, and anchoring system. Each chain link had a pair of 2” x 12” bars connected by an 11” pin. The 130-foot tall rocker towers supported most of the weight as compression pushed down on the bridge's deck. The towers served to dissipate the compression directly into the ground. Ordinary anchorage to bedrock wasn’t practical in this instance because of the considerable depth at which bedrock was found. Instead, the design called for a 200-foot-long and 34-foot wide reinforced concrete trough supported by 405 octagonal concrete piles to share the weight.

The bridge stood 39 years before the disaster. After extensive studies and investigations, experts determined that the main cause was stress corrosion cracking. The heat-treated carbon steel eye-bar broke, placing stress on other parts of the bridge. The remaining steel frame buckled from concentrated stresses. The eye bar broke as a result of a cleavage fracture that developed from a crack during the casting of one of the eye-bars. Through the years, the crack worsened from stress corrosion and corrosion fatigue until the structure gave way.

Another major factor that accelerated corrosion fatigue and stress corrosion was the weight of new cars and trucks. When the bridge was built, the average car weighed 1,500 pounds (the weight of Model-T Ford). In 1967, the average weight of a car was 4,000 pounds. In 1928, West Virginia law prohibited the operation of any vehicle whose gross weight, including its load, was more than 20,000 pounds. In 1967, the weight limit almost tripled to 60,800 pounds gross, and up to 70,000 with special permits.

The fact that the design called for only two eye-bars on each side, instead of a thick stack of thinner bars combed together (as was the common practice at the time), meant that the failure of one bar would impose excess weight on the other causing failure. Consequently, the eye-bar flaw coupled with the extra weight of cars and heavier traffic as the bridge aged was a recipe for disaster.

The Cypress Freeway was a double-deck freeway structure connecting Interstate 880 to the Bay Bridge. The 6.9 magnitude Loma Prieta quake of 1989 caused the upper deck to collapse onto the lower deck. Forty-two people died as a result of the bridge failure.

Built in 1936, the San Francisco Bay Bridge is the second busiest bride in the U.S. It carries 270,000 cars each day between Oakland and San Francisco. Two connected faults lines, the Rodgers Creek and the Hayward, run beneath San Francisco Bay. 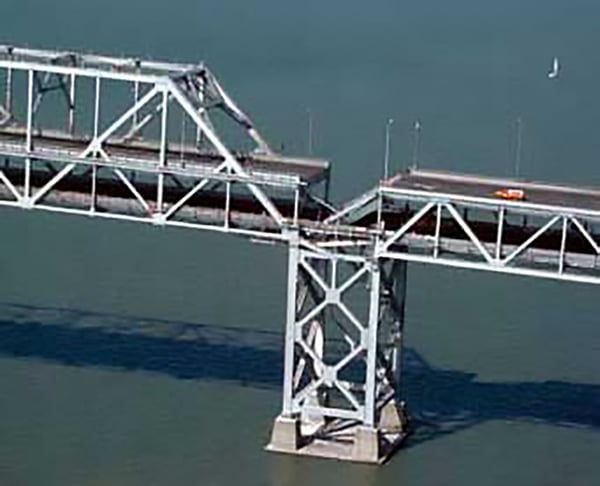 While the Loma Prieta quake was the direct cause of the collapse, the bridge was more than 50 years old in 1989, and it had not be retrofitted to lessen the impact of an earthquake. Only after the quake did Caltrans (California Department of Transportation) undertake a project to retrofit the bridge. At that time, the decision was to rebuild 2.2 miles of damaged bridge on the eastern span. The project was years late and billions over budget mostly due to the discovery of 32 bolts intended to stabilize the bridge during an earthquake were cracked and brittle. After installation, these bolts were covered by bridge roadways, and thus inaccessible to remove or replace. Caltrans adopted a plan to add a metal “collar” around the newly-built section to do what the bolts should have done. The State raised the toll on the bridge to cover the cost of repairs.

The Caltrans mistakes made national headlines. In a televised interview, a materials science and engineering professor from the University of California criticized Caltrans for not employing metallurgical and corrosion expertise, especially since the issue occurred soon after the bolts’ installation, making the public safety issue obvious before the work was completed.

Bridge support plates half as thick as they should have been were the cause of the Interstate 35 disaster in 2007. Thirteen people died and 145 were injured when the bridge collapsed into the Mississippi River during evening rush hour.

This bridge was a steel truss arch bridge built in 1967 that spanned the St. Anthony Falls over the Mississippi River. The bridge was the third busiest in Minnesota, carrying 140,000 vehicles daily. The firm of Sverdrup and Parcel designed the structure to the standard specifications of the American Association of State Highway Officials. HurCon, Inc. and Industrial Construction Company received the award to construct the bridge. However, HurCon backed out after expressing concern that one section of the structure could not be built as planned. Nonetheless, construction proceeded in 1964, and the bridge opened to traffic in 1967. At the time of failure, the bridge was still one of the most recent river crossings built in Minneapolis.

The bridge consisted of 14 spans with a total length of 1,907 feet. The three main spans were of deck truss construction; two of the approach spans were of steel multi-girder construction; and the remaining spans were of concrete slab. Since 1993, the Minnesota Department of Transportation (Mn/DOT) inspected the bridge annually. In the years prior to the incident, Mn/DOT reports noted structural problems. In 1990, the federal government rated the bridge as “structurally deficient,” based on a finding of significant bearing corrosion.

Assistance from police, firefighters, volunteers and charities came quickly after the structure failed, as did planning for a replacement bridge. In fact, the new bridge, named the I-35W Saint Anthony Falls Bridge, opened on September 18, 2008.

The National Transportation Safety Board determined that a design flaw was to blame. Namely, a gusset plate used to connect beams and girders to the columns was too thin and ripped along a line of rivets.

The impact of these and other bridge failures in the United States, indeed, has been grievous. Many lives were lost and billions of dollars in damage to property and commerce occurred. These incidents should serve as both a “wake-up” call and a constant reminder of the need to inspect, maintain, update, and replace old bridges regularly. The federal and state governments must figure out a way to have funding available to meet these ongoing needs.