NYC 2017 Summer Streets Construction Embargo: What You Need to Know

By Admin Posted 08.08.2017
Industry News, DOT, Permits, NYC
The NYC 2017 Summer Streets Construction Embargo will take place Monday, July 31 through Saturday, August 19.
Feature Image: 'Summer Streets Weekend 3' by NYC DOT under CC BY-NC-ND 2.0
Summer Streets is an annual celebration of public space in which all who visit and live in New York City have more places to enjoy the amazing weather. On August 5, 12, and 19, from 7am to 1pm, almost seven miles of the city’s streets will be open to the public to play, run, walk, and bike– without having to worry about car traffic. 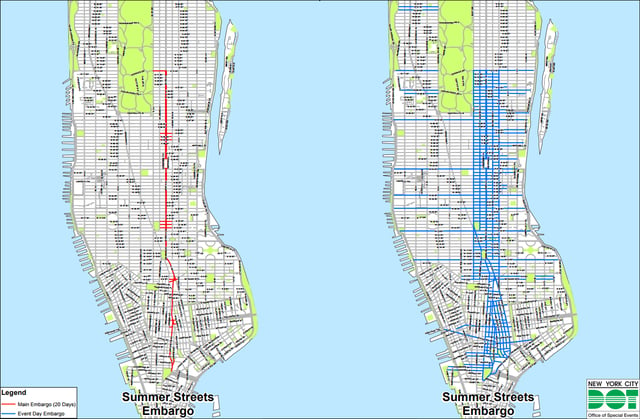 Streets affected continuously are marked on the attached map in red, and day embargos (Saturday's from 12:01am to 6:00pm) are marked in blue. Image Credit: NYC DOT

If you would like assistance with a construction project impacted by the Summer Streets Construction Embargo or have other questions related to DOT permitting, please contact Milrose Consultants at DOT@milrose.com.