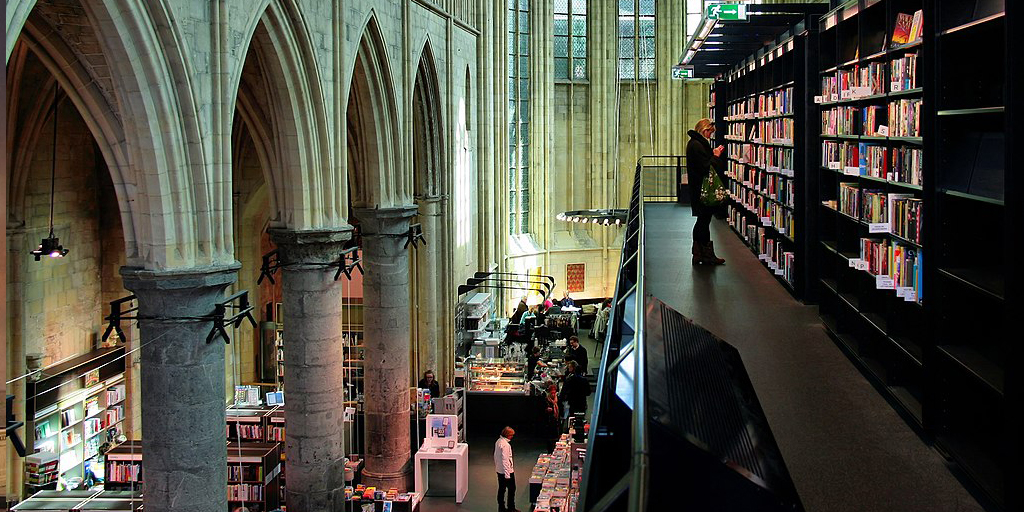 There are several characteristics that comprise a great adaptive reuse project.

In the city of Maastricht, Netherlands, stands a 700-year-old church that now is a stunning bookstore. Built in 1294 about eighty years after Saint Dominic established the Order of the Preachers, this Catholic Church of Our Lady is a classic Romanesque structure with several semi-circular arches. Many of its original sculptures, capitals, and reliefs remain to this day. The building continued as a place of worship for 500 years until Napoleon’s army closed it during the invasion of 1794, despite Napoleon’s respect for the Catholic Church as a foundation for morality, and his appreciation for its ability to maintain social order and mend the religious riffs caused during the French Revolution. Since its closure the building functioned as a warehouse and even a bike shed prior to the opening of the bookstore in 2006.

The Amsterdam-based architectural design firm, Mirx and Girod, was responsible for creating the bookstore within the church and was awarded the Lensvelt de Architect Interior Prize in 2007 for the work. The architects incorporated a modern scheme of the store without obstructing the religious motifs or structure of the building. The space includes a café and a long table shaped like a cross where the choir formerly sat, and a three-story bookcase with walkways, staircases, and an elevator.

The repurposed Church of Our Lady is a spectacular, thoughtful, and respectful reuse of the space with a design that incorporates most of the former trappings in a creative “homage” to it religious roots.

The impetus for building flak towers was a 1940 Royal Air Force raid on Berlin. Following the raid, Adolf Hitler commissioned the construction of three large towers to protect the capital. Plans for the towers included retractable radar dishes to bolster communication and defense. So important to the German war effort were these towers that Hitler, himself, produced the preliminary sketches and ordered completion within six months. In fact, the German national rail service altered its schedules to ensure timely delivery of required construction materials like steel, wood, and concrete.

The flak towers had thick concrete walls 11 feet deep, making them nearly invulnerable from air attacks by bombers of the time. The tower’s multi-level artillery could produce 8,000 rounds per minute using of a variety of caliber bullets. They could fire from a 360-degree window, making them particularly effective. 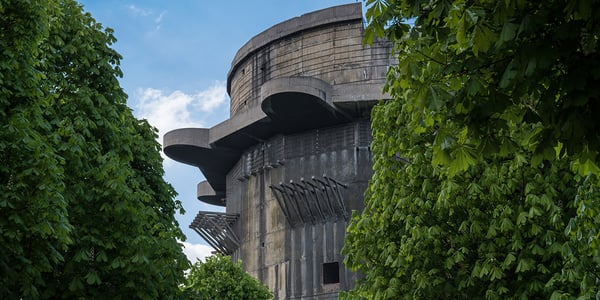 This awesome arsenal of weaponry could project ordinance thousands of feet in the air. For more images of World War II flak towers, check out this article by Jack Knight at War History Online.

The massive scale of these structures makes them ideal for a variety of contemporary reuse projects. For example, one flak tower in Hamburg now operates as a renewable energy center. Other towers have been converted into music schools, shops, and a media business park. Bunkers in Vuren, Netherlands, and Britain were transformed into homes. What better repurpose of such horrific icons of war than for learning centers, dwellings, and environmental improvements?

The water cube in Beijing was built for the 2008 Olympics. Modern and awe-inspiring when constructed, the structure was useless after the games and, thus, a prime candidate for reuse. And that is exactly what the Chinese did. Now dubbed the “Happy Magic Water Park,” the repurposed cube drew nearly one million visitors in its first year of operation. 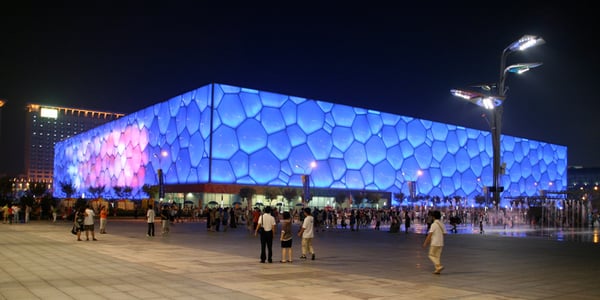 As with the other adaptive reuses we highlight here, the Water Park preserves the main elements of the Cube in a creative and attractive way for a venue meeting a particular need. The Park features slides, a lazy river, a wave pool, and floating jellyfish. As Beijing's second most visited tourist spot (the Great Wall is the most popular), Happy Magic Water Park is a center for family activity and the largest water park in Asia.

So, what about the future of adaptive use? The concept shows no signs of slowing. Some of the edgier proposals for future projects include turning an abandoned Italian railway viaduct into apartments, a futuristic library made of airplane fuselages, and the repurposing of a 747-jumbo jet into a hostel.