Times Square Through the Decades

A lot has changed over the years in New York City. But no doubt one of the greatest transformations our island has ever known came in the form of Times Square throughout the 20th century. Today, New Yorkers complain about 42nd Street as if it's a right of passage—but over at Milrose, we couldn't be happier about Times Square’s transformation. From monumental construction changes to theater venues galore, the neighborhood has never looked, or truly been, better. 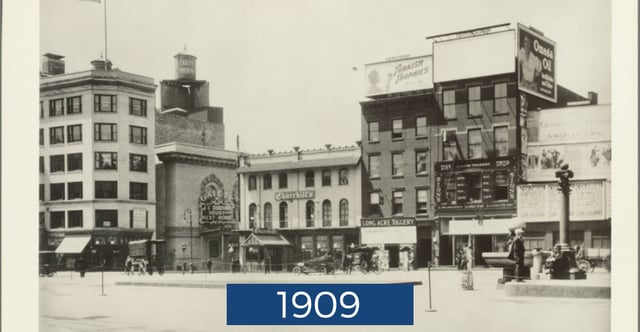 Construction of the New York City subway station began in 1904. Then, in 1907, the first documented New Year’s Eve Times Square ball drop event took place. The iconic Flatiron Building was completed in 1903. In 1905 The New York Times built and moved into the second tallest building, the then-Times Tower, located between Broadway and Seventh Avenue and 42nd and 43rd Streets. It was during this big transition that what was known as Longacre Square, famous for its horse trades, was renamed as Times Square. It was also during these early 1900s that street lamps powered by electricity and electric signs started to appear in the area. 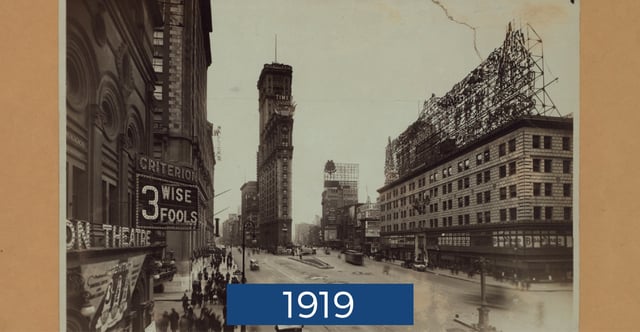 In 1912 the RMS Titanic, en route to New York City, sunk, and in 1914 World War I started. In this same decade, World War I also ended. At the latter part of the decade, the Art Deco style was popular in new skyscraper designs.

Towards the end of the decade, The New York Times moved out of Times Tower—however, the tower remained (and still remains) a huge focal point of the area. After WWI ended, the square had become a popular place of celebration, useful for anything from presidential elections to parades. This is the decade when most reputable theaters had moved into the square area and luxury hotels began to be established. 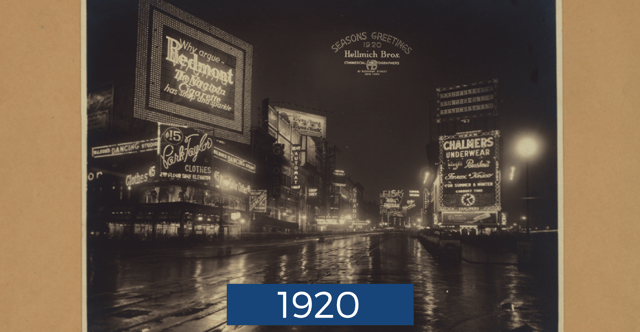 Times Square’s accessibility began to flourish during the 20s—all forms of public transportation stopped at 42nd Street. A Times Square building boom took place in the 1920s and advertising in the area was on the rise, both in price and in number and size of advertisements. Times Square was at the height of its cultural reputation during this time—a reputation that would start to take a turn for the worse at the start of The Great Depression, and not fully be restored until 70 years later. 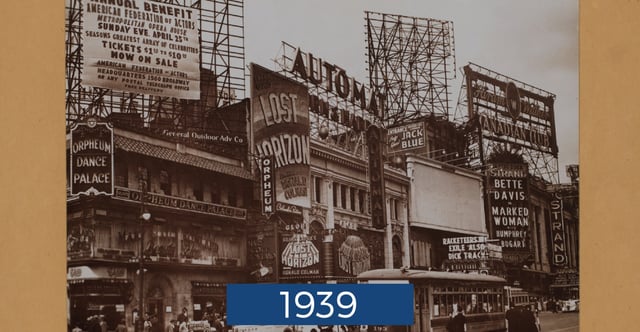 It was in 1931 that the construction of the Empire State Building was completed—at the time, it was the world’s largest building at 1,454 feet tall and in 1939 the start of World War II. Because of zoning regulations, the Art Deco style building was still appearing in the 1930s.

The 1930s was largely shrouded by the worst economic period in U.S. History: The Great Depression. The building boom that took place in the 1920s in Times Square came to a halt during the 1930s. In order to survive the depression, once cultural and exquisite restaurants and theaters in the square were replaced by cheap eats and cheap entertainment. Residents who were accustomed to the luxurious lifestyle of the 1920s were forced to move from the area to more affordable living situations. The New Year’s Eve ball drop, however, continued to take place year after year.

It was in 1945 that Americans celebrated the end of World War II. In 1940 the Tiffany & Co. flagship store opened as the first shopping building with central air conditioning. In 1942 and 1943 there was no Times Square ball drop due to the ongoing war; however, people still gathered and instead of a ball drop, there was a moment of silence and chiming bells.

In 1945 the largest crowd Times Square has ever seen in its history gathered together to celebrate a raucous victory over Japan Day. Skyscrapers were growing, and entertainment was big, especially when it came to entertaining men leaving for war. 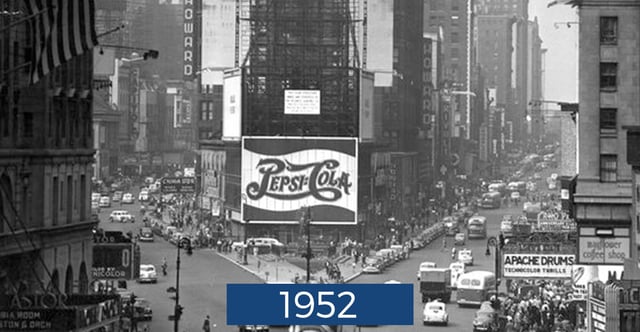 In 1952 the United Nations Headquarters was built, and in 1953 the New York Yankees won their 5th consecutive World Series championship, breaking the previous record. The 1950s was a conservative time across all of America, especially with the Cold War going on. There was an attempt to shut down the cheap entertainment during this decade and try to put the Times Square reputation back on track to what seemed like its short-lived glory days. That effort, however, quickly lost steam. 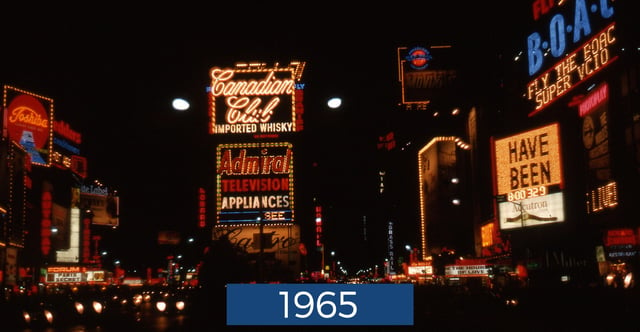 In 1961 a new NYC Zoning Resolution was implemented, encouraging more open space, and in 1964 the New York World’s Fair opened. In 1969 the popular movie ‘Midnight Cowboy’ was released, featuring a Times Square that was allowed to embrace the kinds of shops and entertainment that brought about its declining reputation by new ways of thinking and a certain ‘openness’ introduced in the 1960s. This put Times Square on the path to somewhere even darker in the 1970s and 1980s. 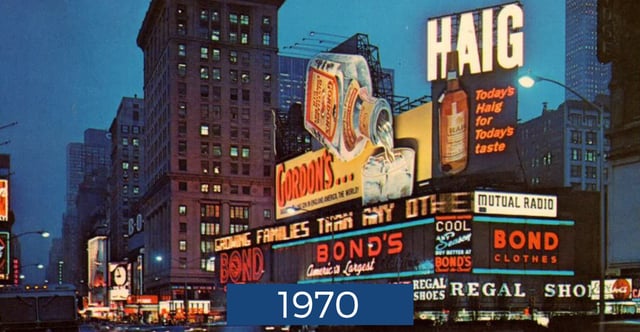 In the early 1970s especially, Times Square was a difficult place to be. Felony and crime rates were high, despite heightened police existence. A plethora of go-go bars, sex shops, peep show establishments, and adult theaters became symbols of the city's very apparent decay. By 1973, however, the first TKTS booth opened in Times Square. TKTS Discount Booths encourage same-day theater ticket purchases. And at the time, TKTS served particularly to provide affordable theater admission with the hope of increasing Broadway attendance and deter crime. 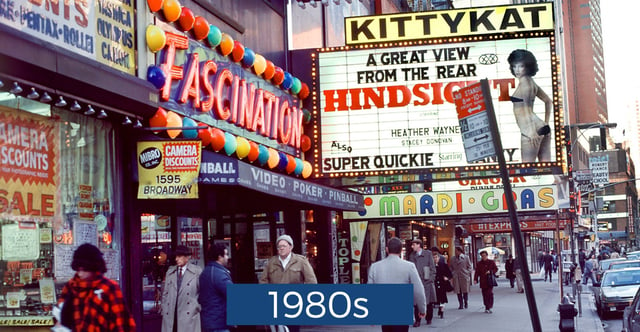 The 1980s remained a rough decade for Times Square. Not much occurred as far as building improvements and additions go, but crime still skyrocketed. In 1981, Rolling Stone declared West 42nd Street the “sleaziest block in America.” Hustling of all kinds was pervasive in the neighborhood, and the drug trade especially flourished. Homelessness was rampant along 42nd Street, and crime continued to spike until 1989. During the upswing of Times Square in the 80s, though, a significant commercial building boom began to take over in the western parts of Midtown. Created under then-Mayor Ed Koch and David Dinkins, the development plan looked towards the long-term and opened up positive possibilities into the next decade. 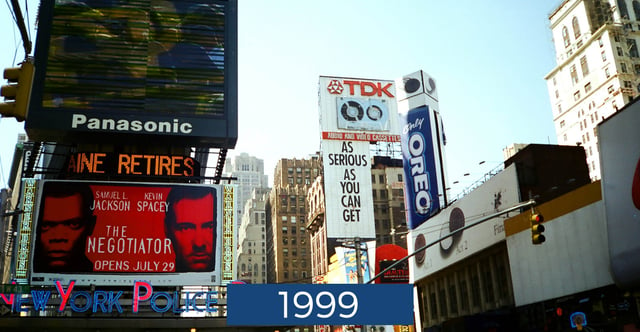 In the year 2000, the New 42nd Street opened shop at 229 West 42nd Street. It became home, too, to The Duke on 42nd Street. This 199-seat black box theater (named, of course, for Doris Duke) became the welcome home base to seven other non-profit performing arts centers as well.

The eventual revitalization of Times Square was so successful that it led to the evolution of another major New York City street, Broadway. Parts of this street within Times Square were officially closed off in 2009 in order to encourage pedestrian-only traffic among the plethora of shops, restaurants, and theater entrances. 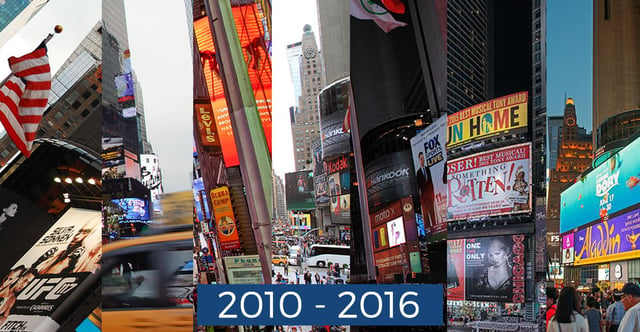 Referred to in the New York Times as a "billion-watt neon circus," Times Square is entirely different today than it was even twenty years ago. Electronic billboards the size of buildings, TV show characters roaming the streets, and the occasional celebrity sighting are just a few things you can expect when visiting the famous (and at times—as history reminds us—infamous) 42nd Street. Broadway between 14th Street (Union Square) and 23rd Street was remade in 2010, transforming the area and encouraging more permanent, capital-intensive designs that have taken the neighborhood by storm in the last six years. Huge names like Gap, Old Navy, Hershey, the National Football League, and Cirque du Soleil have all stepped into the spotlight at 20 Times Square, officially making the area more robust and recognizable than ever.

Sign up for Milrose Insights for more articles on the history of New York City.