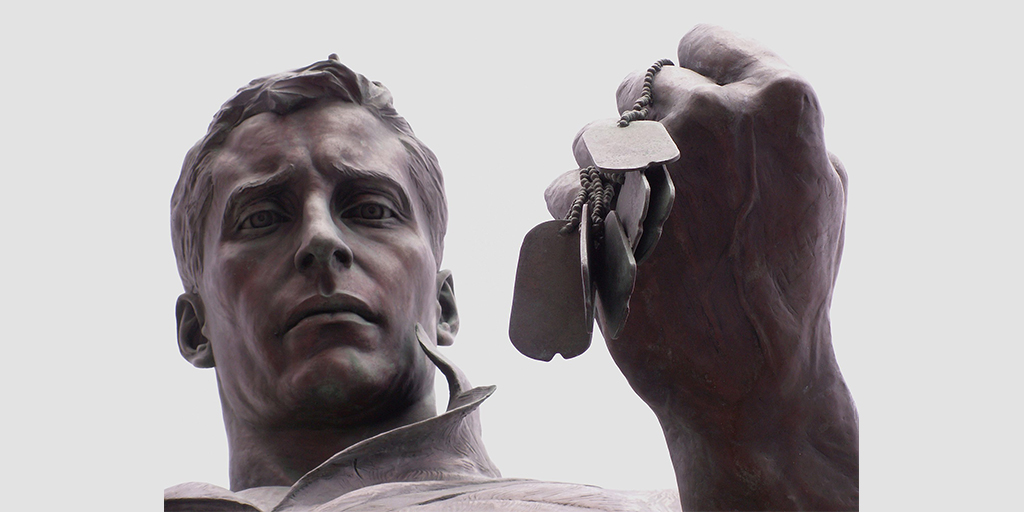 On January 25, 1776, the Continental Congress authorized the first war monument in honor of Richard Montgomery, a Revolutionary War general who died in an assault on Quebec in December 1775. He was one of the first generals in that war to lose his life on the battlefield. Montgomery had taken Montreal shortly before joining Benedict Arnold to lead a Patriot assault on Quebec. The assault failed, and Congress asked Benjamin Franklin to commission one of France’s best sculptors to create a monument in memory of the fallen general. Ultimately, Franklin hired Jean Jacques Caffieri, King Louis XV’s personal sculptor, for the job.

Caffieri finished the work and shipped the monument to America. It arrived on our shores in 1778 at Edenton, NC. Originally intended for placement at Independence Hall, the monument eventually ended up at St. Paul’s Chapel at the behest of Congress. There, Charles L’Enfant, the French architect most known for his design of the basic plan for Washington D.C., supervised its installation beneath the portico of the Chapel. It remains there today. Several years later, in 1818, Montgomery’s remains were relocated from the battlefield to St. Paul’s.

There are hundreds of war memorials and monuments in the U.S., as well as 26 permanent American cemeteries and 30 federal memorials, monuments, and markers in 17 foreign countries and U.S. territories. Here, we look at a few of the more interesting and profound ones in New York, New Jersey, and Connecticut.

Located on the upper west side of Manhattan, the Soldiers’ and Sailors’ monument commemorates the service of Union soldiers and sailors during the Civil War. The New York State legislature began considering the creation of Civil War memorials around 1869. Yet, it was not until 1893 that the state legislature convened the Board of Commissioners to create a monument for soldiers and sailors who served in the Union Army and the Revolutionary War. Disagreement about where to locate the structure continued for years before the various organizations involved agreed on a site at 89th Street and Riverside Drive.

The New York-based architectural firm of firm of Stoughton and Stoughton designed the monument to be a larger-scale version of the Choragic Monument of Lysicrates in Athens (Circa 334 BCE), which honors a wealthy patron who sponsored an award-winning musical performance. The Choragic monument consists of a circular structure sitting atop a tall square base. The friezes depict stories from the myth of the Greek god Dionysus, whom the ancient Greeks credit for founding Greek theater. 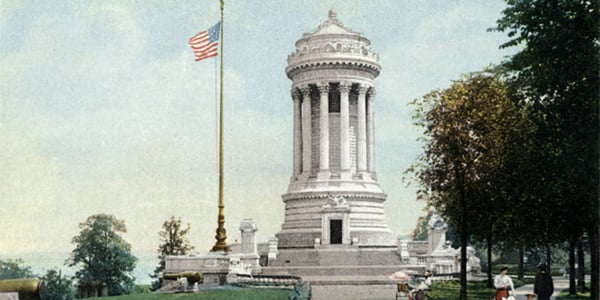 The ground-breaking for the Soldiers’ and Sailors’ monument was on September 21, 1900. Work continued until its completion in two years later at a cost of $300,000. President Theodore Roosevelt dedicated the structure on Memorial Day, 1902. The cylindrical form of 12 columns of white marble stands 100 feet. The plinths on the south stair list the New York volunteer regiments in the Civil War.

In the early 1960s, the city spent over $1 million to repair the monument that included a new roof. Presently, the city is considering further repairs to loosened joints, chipped stone, vandalism, and general wear since its first “face-lift” fifty years ago. The proposed restoration plan is based on a 2017 third-party Conditions Survey and Treatment Study.

Visitors to the battlefield at Saratoga National Historical Park near Stillwater, New York, can explore the rich history of the battles of Saratoga through reenactments, memorials, well-preserved historical structures and other artifacts. On Park Tower Road stands a marker the commemorates a foot wound to the “most brilliant soldier of the Continental Army.” Though the inscription does not mention the name of the soldier (and is the only know war memorial that does not contain the name of the honoree), the “most brilliant soldier” is Benedict Arnold.

Former Major General John Watts de Peyster of the New York State Militia erected this monument in 1887 in memory of Arnold who was, as the inscription notes, “desperately wounded on this spot” and who won “for his countrymen the Decisive Battle of the American Revolution and for himself the rank of Major General.” This was the third injury to his foot – the first occurred during the battle of Quebec and the second in the Battle of Ridgefield when his horse was shot from under him. The last injury at Saratoga effectively ended Arnold’s military career.

As many recall, Arnold changed sides in the Revolutionary War after he “suffered” what he termed “insults” by the Continental Congress after the Battles of Saratoga. He also opposed treaties that provided for French military assistance to the American rebels. As a result, Arnold began to negotiate with British agents that culminated in his changing sides in 1780. As part of the agreement with the British, Arnold attempted to hand over his American command of the key fortification at West Point. Although this attempt failed, Arnold escaped and received the rank of Brigadier General and a payment of £ 6,000 from the British government.

Situated on the Boardwalk in Atlantic City, this stunning, subtly-lit memorial pays tribute to those who served in Korea. Its proximity to the restaurants and carnival rides lends a serious overtone giving onlookers pause to reflect on a conflict that we, as a country, do not talk about or reference much. According to NJ.gov, the monument serves to “heal the spiritual and psychological wounds suffered by Korean War veterans, their families and friends.” The hope is that it will facilitate the healing process by allowing visitors to understand America’s involvement, what it accomplished, and the contributions of those who served. No matter how people perceive the Korean War, it did secure a victory for democracy in South Korea.

New Jersey Senator, Louis Kosco, wrote the legislation to enable the construction of the memorial in 1996. The legislation included an appropriation of $25,000 from the State Legislature to begin work, and it established the New Jersey Korean War Memorial Committee. A grant of $1 million from Atlantic City's Casino Reinvestment and Development Authority (CRDA) covered 1/3 of the construction costs. Additional funding came from private and corporate sponsors.

Thomas J. Warren was chosen as the primary sculptor. After this commission, Warren went on to teach and accept many projects such as the Medgar Evers Memorial in Jackson, MS, the large marble relief panel of George Washington at the spot where he crossed the Delaware River, and the 8 1/2- foot maple crucifix and figure of Christ in St. Michael’s Church, Mt. Airy, MD, among several others.

The Korean War Memorial includes a 12-foot high statue of "The Mourning Soldier" who is grasping dog tags and remembering his lost comrades. A group of soldiers under fire emerges through a sheet of water beside him. The back wall of the Memorial contains the names of the 822 New Jerseyans who were killed or are still missing in action under an eternal flame.

Then Governor, Christine Todd Whitman, officiated at the dedication ceremony on November 13, 2000. Several dignitaries were present, along with keynote speaker and Medal of Honor recipient from New Jersey, Hector A. Cafferata, Jr. At the ceremony, members of the Korean-American community, dressed in traditional Korean clothing, sounded a ceremonial gong as the New Jersey Army National Guard presented a nine-gun rifle salute. The ceremony concluded with a flyover of four F-16C Fighting Falcons.

John Basilone was a gunnery sergeant in the United States Marine Corps during World War II. He received the Medal of Honor for heroism above and beyond the call of duty during the Battle for Henderson Field in the Guadalcanal Campaign. He also received the Navy Cross posthumously for heroism during the Battle of Iwo Jima. He was the only Marine in WW II to receive both commendations.

After serving three years in the U.S. Army with a tour in the Philippines, Basilone enlisted in the Marines in 1940. During the invasion of Guadalcanal, he was instrumental in defeating a Japanese regiment that outnumbered his men four to one. Though most of his soldiers died in the battle, Basilone and two others managed to hold the line for three days until reinforcements arrived. During the siege, he repaired weapons and snuck behind enemy lines several times to replenish ammunition for himself and his men. At one point he ran with his 90-pound weapon to the gun pit of his dead crew, and when attacked from behind, he killed 38 enemy soldiers with his Colt 45 pistol. As a result, Sergeant Basilone earned the moniker, "Manila John," as "the man who changed history in three days," a Marine's Marine," and "a one-man army." He eventually returned home where he received the Medal of Honor. Later he would reenlist and die in the first wave of fighting at Iwo Jima.

Befitting of his extraordinary heroism, the larger-than-life bronze statue of Basilone, sculpted by his boyhood friend in 1948, depicts him holding a very large machine gun off its tripod.

Another superb WW II memorial is the Iwo Jima Monument at Iwo Jima Survivors Memorial Park in Connecticut. Erected by the Iwo Jima Survivors Association of Newington, the Monument was dedicated on February 23, 1995, to the memory of the 6,821 U.S. servicemen who gave their lives during this epic battle. Its base is inscribed with the names of 100 men from Connecticut who were part of that number Dr. George Gentile, President of the Survivors Association and, himself an Iwo Jima survivor, conceived and designed the memorial.

On February 23, 1945, on the Japanese-held Pacific island of Iwo Jima, thousands of Marines died to secure a mountain known as Mt. Suribachi. A photograph recording the second flag raising became inspiration for the famous Iwo Jima sculpture that stands in Washington D.C. What is interesting and perhaps, not well known, is that sculpture in Newington was created from the original photograph of the second flag raising, not the D.C. statue. The soldiers stand on rocks from the mountain summit, and sand from the landing beach was mixed with the concrete base. The flag contains 48 stars, which is historically correct for the time.

In another part of the park, an eternal flame and other monuments to combat medical personnel and chaplains.

These are but a few of the memorials commemorating wars and those who served and died in service to our country. For more information about federal war memorials, check The National War Memorial Registry. Listings of state memorials often appear on state government websites.